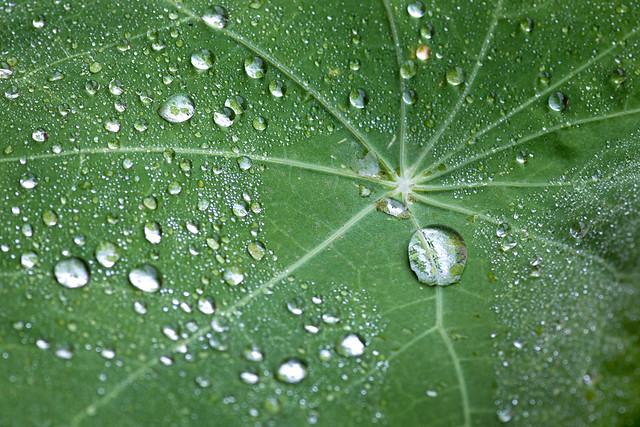 Early into the year, we made a third visit to Featherdale Wildlife Park, this time with some family members who had come to visit and stay with us for a few weeks.  It was their first time to the park, and they enjoyed it immensely.

On previous visits, I have been able to capture some pleasing images of the animals there, and it was no different this time.

On this visit, the sky was nice and overcast, which made for very pleasing shooting conditions, as the light was soft and even, and there were no harsh highlights or glary conditions with which to contend.

When first entering the park, one is greeted with the red-necked pademelons, amongst other marsupials.  These little critters are very cute, and I took the opportunity to pet and feed them, as well as photograph them. 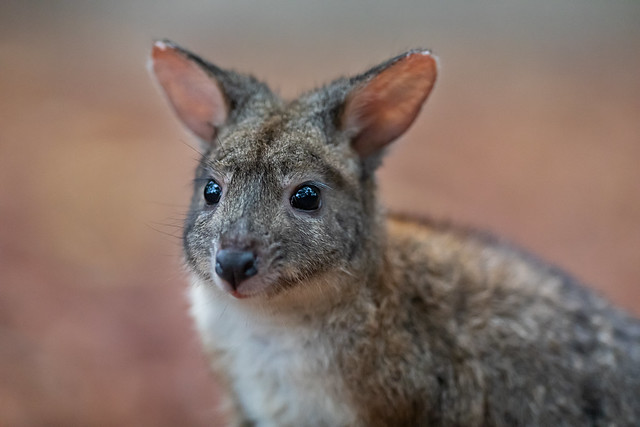 Early into this visit, a striking and richly coloured golden pheasant was perched in a good location, so I captured numerous images of this bird, which is adorned with intense red, blue and yellow plumage. 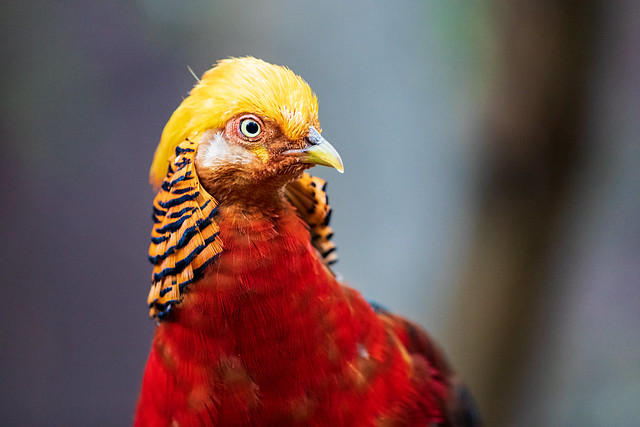 Because we arrived at Featherdale Wildlife Park when it opened for the day, being able to shoot in the lower, overcast light in the early morning required much higher ISO ratings than usual.

Nothing screams cuteness more than a koala, one of Australia‘s unique animals. 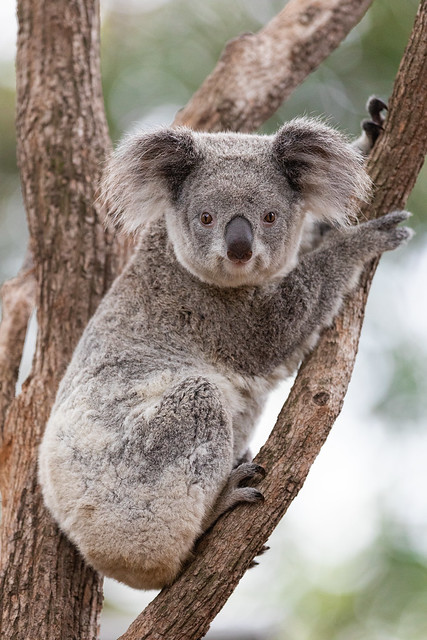 Sadly, during the horrific Australian bushfires in the summer of 2019–2020, many wild koalas perished, and the population has shrunk to dangerously low levels.

This little creature is fortunate, in that he lives in Featherdale Wildlife Park, and does not have to contend with bushfires and drought.

Every time we visit, I always take the opportunity to photograph the penguins.

It is always a challenging exercise, as penguins tend to be highly active, and often flock together, so isolating one bird for a clean portrait is a game of patience and quick reaction once the moment is right. 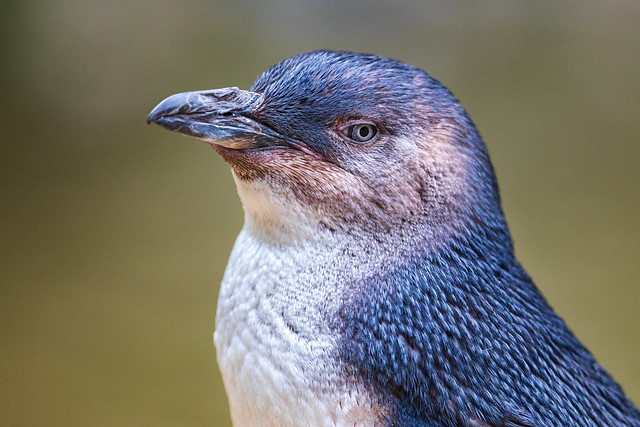 Portrait of a Little Penguin

There are many more animals to see and photograph at Featherdale Wildlife Park, and I am sure we will visit again.

During the early morning of Saturday, 28 July, 2018, a special celestial event was to occur: a total lunar eclipse, resulting in a red moon — one like this: 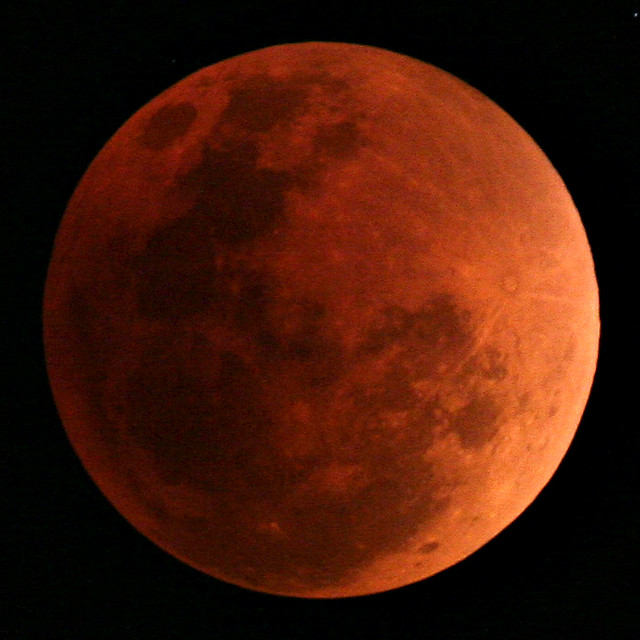 I captured this particular red moon on 28 August, 2007.  Incidentally, it was the first and last red moon I captured!

For the most recent total lunar eclipse, I planned to rise early and capture the moon.

Unfortunately, due to cloud, I barely caught a glimpse of it, so no images were forthcoming.

The night before, however, I captured some images of the rising full moon in the early evening.

Now, there are different ways of photographing the moon.

Some people like to place the moon in the context of a broader scene, depicting trees, city architecture, animals or people.

Other people like to capture the moon in and of itself, with a view to depicting as much detail as possible.

I have historically fitted into the latter category, and I have photographed the moon numerous times with it being the only subject.

Naturally, when using only DSLR equipment and no telescopes or other space observation equipment, I like to use the longest focal length possible so that the moon in all its glory is more prominent, and therefore larger in dimension.

People often wonder which focal lengths to use for capturing the moon.

Which focal length to use depends on the kind of image desired.  In my case, I want as long a focal length as possible.

Once a focal length has been decided, the next question is as follows:

How large will the moon appear in my image?

The answer is that it depends on several factors; namely:

The short answer is that the moon is not very large relative to the frame.

If an APS-C camera is used, there is a distinct advantage, as the moon will appear larger relative to the frame than it would when captured with a full-frame camera.

In my case, I have only full-frame DSLR cameras.

Today I decided to explore and compare the size of the moon relative to my camera’s frame size, when shot at different focal lengths.

The night before the total lunar eclipse, I went outside to capture some test images.  I happened to capture images at both 1,120mm and 800mm.

Both focal lengths are considered extreme super-telephoto focal lengths in the DSLR world, but there is a surprising difference between them.

In both cases, the moon is not very large, relative to the frame.

Let us take a look at how many times the moon can fit into that frame size when captured at the two focal lengths I used.

This is an image measuring 6,720 x 4,480px (the exact image dimensions a Canon EOS 5D Mark IV produces), depicting the size of a full moon relative to the size of the frame. 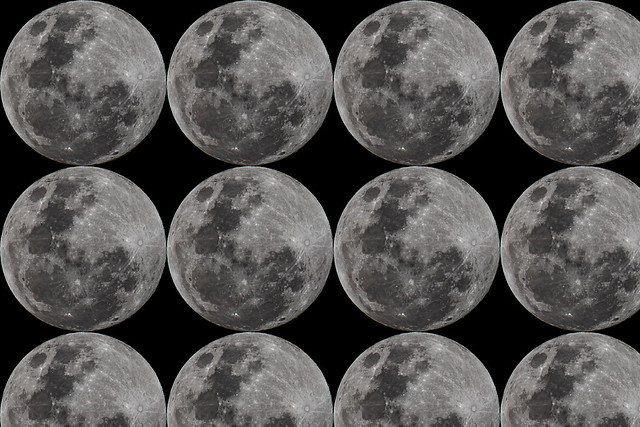 This is an image measuring 6,720 x 4,480px (the exact image dimensions a Canon EOS 5D Mark IV produces), depicting the size of a full moon relative to the size of the frame. 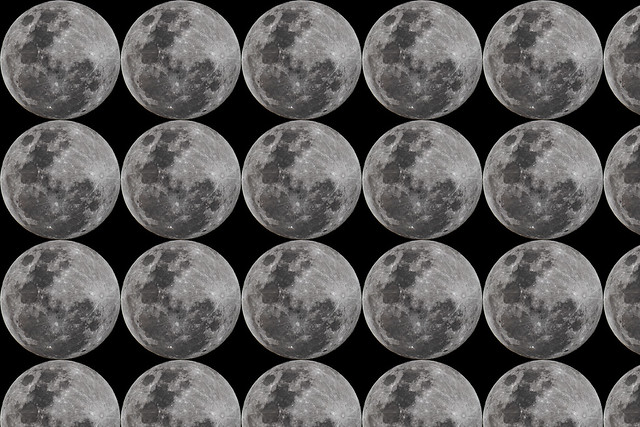 As can be seen, despite using long focal lengths on a full-frame DSLR, the moon is still relatively small within the frame.

Here are those key figures again:

It is not quite an exact science, particularly when considering that the image shot with the 800mm focal length was captured just over four minutes later, by which time the moon had risen marginally higher; but it is a substantial difference.

In both cases, while the moon does not dominate the frame, it is certainly large enough to show very pleasing details.

Photographers desiring even more prominence and detail would be likely to attach the camera to a telescope, but if, like myself, a photographer does not have a telescope, but does have long focal lengths, a very pleasing result is certainly possible.