By day four of our time in Africa, and day three of our safari in the Motswari Private Game Reserve in greater Kruger Park, the motions of waking before 5am, driving in the bushveld for three hours, coming back for breakfast, a rest, lunch and then going out for another game drive from 3:30pm until the darkness of night, had become normal — almost routine.

A rather fantastic routine, that is.

By day four (day three in Motswari), we had been for three game drives, which was half of our safari in terms of wildlife sightings and photography.  We had been out twice for afternoon/evening game drives, and once in the morning.  The 6th of October was a full day worth of game drives, and much awaited us.

Astute readers will have noticed that so far, we had not seen any lions.  We had seen and photographed two unique leopards (Makepisi male and Rockfig Jr female), but the King of the Jungle had been somewhat elusive, which is ironic when it is to be considered that leopards are very elusive, and we had seen two of those.

Lions were very much on the mind of Chad Cocking, our guide.  He was well aware that we had not seen any yet, but he was also aware that lion activity in the reserve had been somewhat subdued over the past few days.  There were some small signs of lion activity, but no guarantee we would encounter any.  Chad probably felt under pressure, but being the reserved professional he is, it did not show.

As we embarked upon our second morning drive at 5:30am before the rest of the guests at the lodge departed 30 minutes later, Xenedette and I were mentally resigned to the fact that we just may not see any lions at all.  However, we were only half-way through our game drives, so the situation was not as dire as it may have seemed.  Still, we were over the moon to have seen everything we had seen to this point, and not seeing lions was not going to otherwise diminish the awe of what we had seen and experienced.

A few minutes into the morning drive, before sunrise, we encountered a giraffe grazing near the Motswari airstrip.  We stopped for some silhouette images against the reddish glow of the pre-sunrise sky.  Here is one of the images I captured: 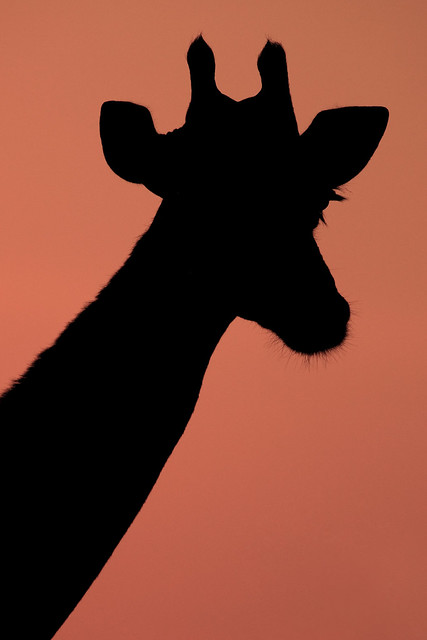 After a short visit with this lanky individual, we proceeded onwards.  Our next stop was Argyle Dam, home to hippos and crocodiles, and a popular watering hole for much of the Motswari wildlife.

Chad took the Land Rover onto the muddy banks of Argyle Dam, where we disembarked, and in so doing entered the back yard of the most dangerous animal in Africa: no, not a predatory cat, but the hippopotamus.

Mario and I dashed off for a silhouette landscape we captured just after sunrise, while Chad followed us, and spent his downtime videoing and photographing Mario (our safari leader) and I in action, using one of Mario‘s cameras, which he had brought to shoot video footage of the safari.

Throughout the trip he shot his stills with a Canon EOS-1D Mark IV and a Canon EOS 5D Mark II, and used a Canon EOS 60D for video.  Meanwhile, Xenedette and Petros (our tracker) stood on the bank chatting.

Here is an image I captured of a sunrise over Argyle Dam: 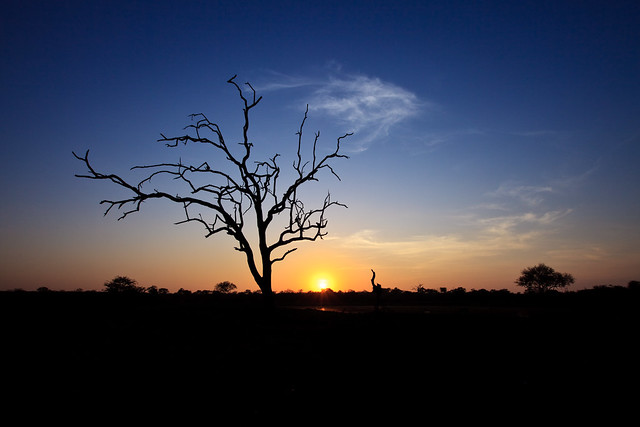 A faint reflection of the rising sun in the water can be seen.  What was more interesting was what we would next see.

The sun continued to rise, and the light became very warm.  We could hear the distinctive grunts and snorts of hippos echoing throughout the morning silence of the Timbavati.  The hippos were only a little way in the distance in Argyle Dam.

Mario and I set about photographing the hippos, patiently waiting for a hippo to yawn, as it makes for much more interesting imagery than what otherwise looks like a submerged rock in the water rather than the hippo that it is.

Finally, our patience paid off.  Not only did we both land shots of a hippo yawning, but the angle and direction of the sunlight backlit the hairs on the hippo‘s nose. 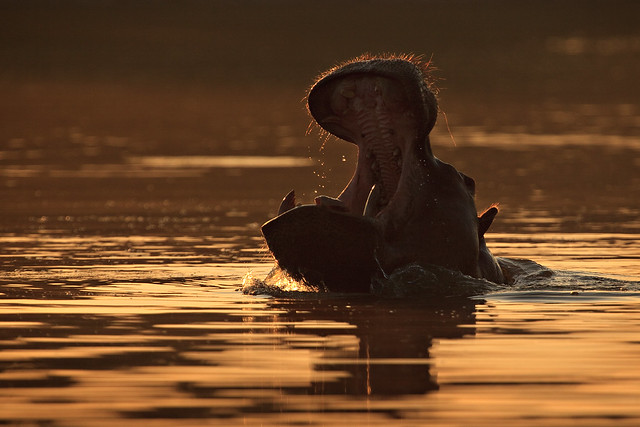 Soon enough, it was time to make tracks for further wildlife viewing.

Well after sunrise, our next encounter was a pair of southern yellow-billed hornbills perched high atop a tree.  From where we were, even with a focal length of 600mm, it was not going to be possible to feature a hornbill prominently in the frame, so some liberal cropping would later be needed.

We sat for a few minutes, capturing these distinctive birds in their habitat.  Fortunately our vantage point was such that the warm morning light shone upon the hornbills. 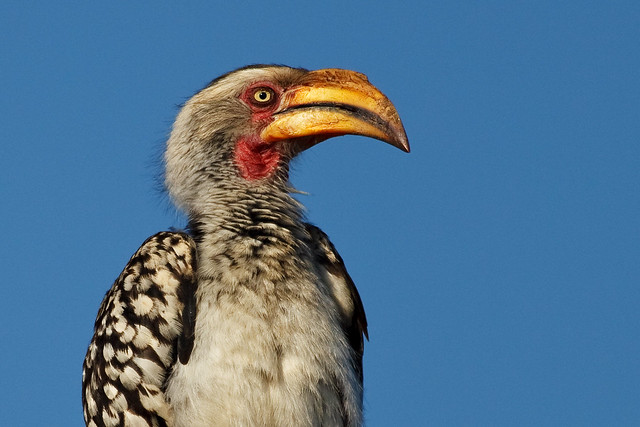 Portrait of a Southern Yellow-Billed Hornbill

As we continued on our morning drive, we had sightings and captured images of impala, a Wahlberg’s eagle, a solitary crocodile basking in the morning sun, and more impala.

Ten minutes after the most recent impala image I shot, we were laying our eyes upon something magical.

The Motswari trackers and guides had been hard at work, and all of sudden, in front of us, resting on a termite mound in the morning sunshine, were two Jacaranda Pride lionesses.  Wow!  Finally, we had seen one of the species of majestic big cats we had longed to see.

Not only did we finally lay our eyes upon wild lionesses, but we were a matter of only a few metres away from them. 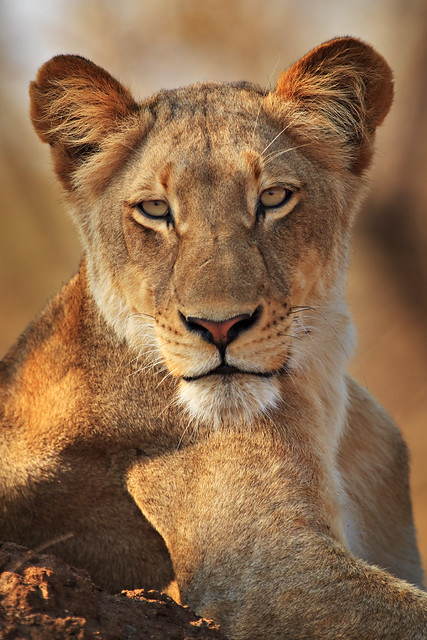 Just to be seeing these regal big cats was an awesome experience, but the photographic opportunities were also fantastic, with warm morning light in the right place, and a relatively clean background.

Even though we were quite close, I used long focal lengths to produce tightly framed portraits, isolating the Jacaranda Pride lionesses from the bushveld surrounding them. 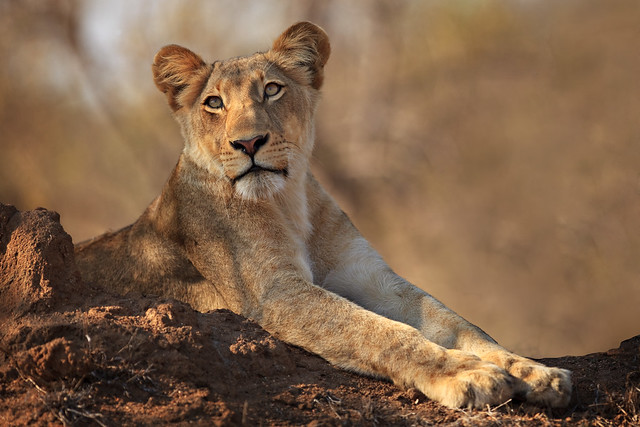 During the 25 minutes we spent with the lionesses, something rather unexpected happened.

One of the Jacaranda Pride lionesses got up, climbed down off the mound and wandered about 20 metres away.  We followed her, and observed her doing something out of our direct sight.  Little did we realise at the time, but we had observed the most unexciting lion kill in history.  She had found a small tortoise and killed it!

She returned to the mound, where we shot stills and video of her with the small tortoise in her mouth!  I have not processed or published any images from that spectacle yet, but will eventually get to it.

Soon we departed, had a morning coffee and biscuit on the banks of the Nhlaralumi, and eventually made our way back to the lodge for breakfast.

As exciting as it was to see Jacaranda Pride lionesses towards the end of the morning drive, we did not know that on our afternoon drive, we had see and photograph every African wildlife species in the ‘Big Five‘: Cape buffalo, elephant, leopard, lion and rhino.

Within a short time of embarking on our afternoon drive, we encountered six Cape buffalo bulls in the bush near the Sohebele River.  While we stopped to photograph them, I did not land any great images, as the light was still quite harsh and the buffalo were in thick bush, with points of contention being branches, foliage and messy backgrounds.

Our next sightings included kudu, elephants (again in thick scrub under harsh light), a large crocodile on the other side of Argyle Dam (where we had been that morning), and giraffes.  We also spotted baboons running through the scrub, which as it turned out, was to be the only baboon sighting we would have during our time in Africa.

That aside, it had been only 15 minutes, and we had seen and photographed two of the Big Five.

Our next sighting, merely an hour after embarking, was a familiar creature: Makepisi, the male leopard we had encountered on our first night.  We found him again, less than 48 hours after our first sighting; and looking at the GPS coordinates, he was in almost exactly the same spot.  On this occasion when we found Makepisi, he was sitting in the shade.  The sun was a little lower, but still quite hot, in the high thirties.

I captured a number of images of Makepisi, and have one ready to publish, but have not quite got to it yet; I will post that image on another day.

Our second encounter with Makepisi meant we had seen three members of the Big Five in the one drive.  So far, that is.

The next sighting was an elephant bull grazing in the scrub, and we spent a bit of time there watching, photographing and videoing him.

As the sun got lower in the sky, our next encounter was three white rhino grazing in the warm afternoon light.  They were heading for a drink, so we got ahead of them and parked down on the banks on the watering hole in anticipation of their arrival.  I kept my eyes on the bush up the banks, and spotted the tell-tale shape and movement the first rhino.  Sure enough, two of the rhino came down to the waterline for a drink, with the third following a short time later. 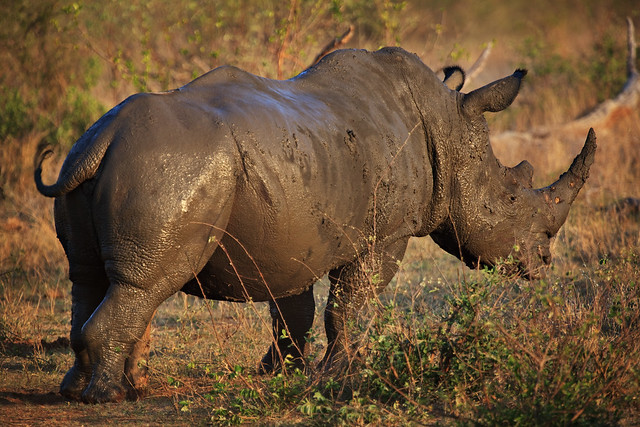 Fresh from a Mud Bath

This rhino sighting clocked four of the Big Five.

The best, and last member of the Big Five was yet to come, only we did not know it.

Less than 20 minutes after watching white rhino drinking from a watering pan, we found ourselves in a dry river bed where two male lions were resting in the late afternoon light.  Another big wow!

Seeing male lions was a real highlight of this drive, and of the whole day.  We were rapidly losing light, and the lions were quite sleepy, but we did manage to land a few shots and witness them moving around a little, with just a hint of a roar from one of them.

I managed to land a pleasing image of the Ximpoko male looking directly at us, and what a majestic lion he was. 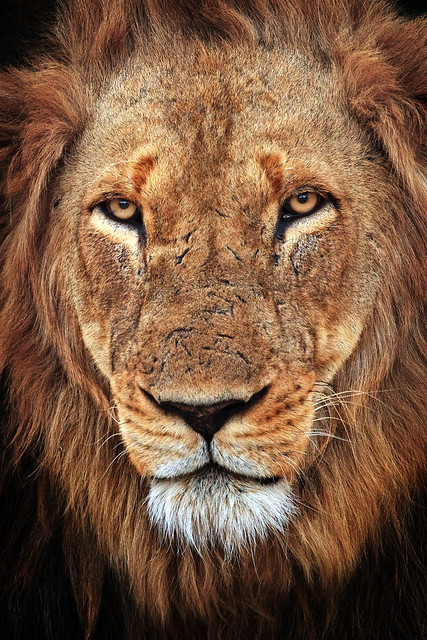 As darkness fell, Petros brought out the spotlight for some lion light painting! 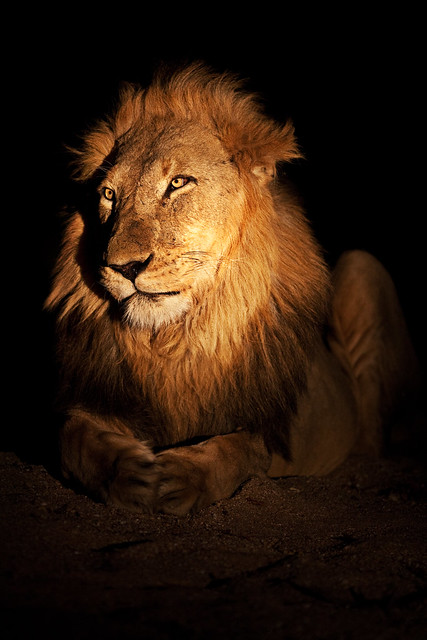 The King of Timbavati

The lions soon moved up the river bank and plonked themselves on the ground for more rest and sleep before the big night they had ahead of them.  We shortly thereafter departed and rushed back to the lodge.

A pleasant and unexpected surprise was a sighting of two porcupines in the bush along the road.  During the night drives, Petros waved his spotlight in an arc across our field of vision, looking for wildlife.  How he managed to see these two porcupines in the darkness and hindered by the speed at which we were travelling, I do not quite know; but he is a tracker, and his job is to find the wildlife that prefers not to be found!

Earlier that day, I had mentioned to our party that it was Xenedette’s birthday.  To have seen all members of the Big Five in one day, and even more incredibly, in one drive, was a magnificent birthday present.  Of seeing what we saw that day, Xenedette said it was the best birthday present she could ever have received.  There we were, in the African bushveld, seeing and photographing some amazing wildlife, right in the thick of nature’s finest.

We soon arrived back at the lodge, and headed to the boma (escorted, of course) for dinner and celebratory drinks.  It was Xenedette’s birthday, and she had experienced some amazing sightings that day.  A cause for celebration indeed, and there we were, having the experience of a lifetime.  What a day it had been.

Stay tuned for day five of our African trip, which would be our final day in the Timbavati.