We have recently returned from our second trip to the Maasai Mara region of Kenya, where we undertook an intense week-long wildlife photographic safari in June of 2019.

This is the first article in a series of articles, in which I will provide a day-by-day account of our sightings, images and experiences during this trip.

After two long flights to Kenya, we rested at our hotel in Nairobi during the day of our arrival, and in the evening, we met for the first time since 2015 our go-to photographic safari leader, Mario Moreno of South Cape Images, to discuss the exciting adventure ahead over a nice dinner of steak and an Argentinian malbec.

We were heading back to the Mara North Conservancy, nearly four years to the date on which we first visited the Mara.  It was very familiar, but it was also very new in some ways, as the trip would reveal over the next seven days.

After landing at Mara North Airstrip, we were met by our guide Francis of Elephant Pepper Camp, who was also our guide during our first trip.  It was great to see him again, and he had prepared brunch for us, which was soon followed by the commencement of our first game drive.

On that first game drive to camp, which can take 20 minutes or three hours, it did not take long before it became apparent that this was not going to be a short drive.  Nature, not us, is the shot caller, and nature had something it wanted to say.

Soon after boarding our private 4WD, a short distance south-west of the airstrip, we encountered cheetahs.  Not even ten to fifteen minutes into our first game drive, we had already encountered one of Africa‘s spectacular species of big cat, and not just one cheetah, but four: a mother with three cubs.

The mother cheetah is known as Amani, and she has three sub-adult cubs of around 12 months of age.

Here is an image I captured of one of Amani‘s cubs: 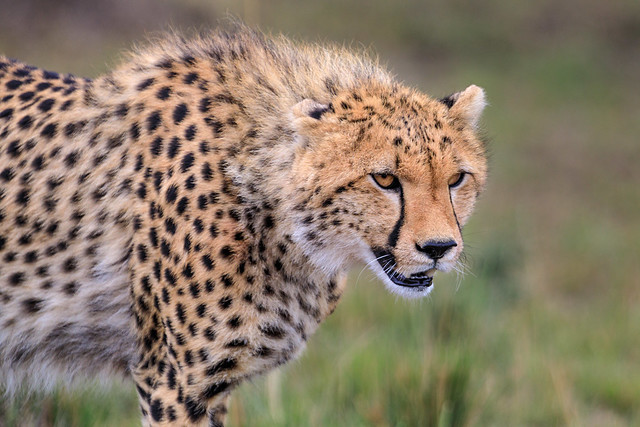 While sub-adult cheetahs quickly grow to the size of an adult cheetah, the distinctive feature which identifies a cub (either very young, or sub-adult) is the mantle — the wild tuft of hair along the back of the head and neck.

The mantle serves two purposes: it assists in camouflage, and makes the cub resemble a honey badger, a species of animal most wildlife would happily avoid.

We spent most of this game drive with Amani and her cubs, but also encountered vultures nearby, and spotted a few baboons, a wildebeest, a topi, and some helmeted guineafowl (affectionately known as Maasai chickens) on the way to camp.

After a fantastic first drive with the cheetahs, we arrived at Elephant Pepper Camp, an outstanding luxurious eco-lodge in the Mara North Conservancy.  It is nestled amongst a distinctive ‘X’ cluster of elephant pepper trees, just south of the C13 road between Mara Rianta and Lemek.

It was great to be back at the camp.  Since we were last there four years ago, its operation has been taken over by Elewana, and the camp is now run by Tom and Alison, who we got to know during the week.

We met Tom and Alison, and went through the formality of the briefing given to guests upon arrival.  Much of the camp was the same as it was when we were last there, but there have been some good changes and enhancements, too, such as AC power in all tents, and wireless Internet access throughout the entire camp.

Shortly afterwards, we sat down to lunch.  As it was the first week of the season, the camp had only just opened, and we were the first guests.  We had the camp to ourselves for the first two days and nights before other guests began to arrive on the third day.

Lunch at Elephant Pepper Camp was superb as always, and we were joined by either Tom or Alison, who attend all lunches and dinners with the guests.

Already we had a great story to relate, having spotted Amani and her cubs early into the trip.

After lunch, I set about my highly disciplined ritual of transferring the images and videos from the flash cards to my laptop and backing them up to an eternal hard disk.  It is very important to ensure that there are at least two, or preferably three, copies of one’s images and videos.

Fuelled by the obligatory glass or two (or three, perhaps) of Amarula, which was my habit at Elephant Pepper Camp last time (and a habit into which I easily and happily fell again this time), soon enough it was time to head back out into the plains to see what the afternoon and evening would bring.

Shortly into the afternoon game drive, we encountered two magnificent elephant bulls on the open plains north-west of camp, not far south of where we had first seen Amani and her cubs earlier in the day.

Mario is a big fan of capturing almost symmetrical, frontal images of approaching elephants, so Francis positioned the vehicle such that the elephant was heading straight towards us.  He kept walking, and we snapped away furiously as his imposing presence dominated our viewfinders.

Here is one of the images I captured:

Once he got close to our vehicle, he veered left and walked in front of us at a distance of only one or two metres.

This big tusker is a magnificent, healthy elephant who has the Mara plains at his disposal.

Less than ten minutes after I captured my final image of this elephant, we encountered Amani and her cubs for the second time!

They were in the same location where we had first encountered them four hours earlier.  As cheetahs can travel considerable distances in a short period of time, it was nice to find them again so soon.

My guess is that they spent the entire time resting.  There is no telling whether they hunted or not, but they had not recently eaten, so any attempts at hunting would have been unfortunately unsuccessful.

Here is an image I captured of Amani resting on a mound and surveying her territory for potential predators or prey: 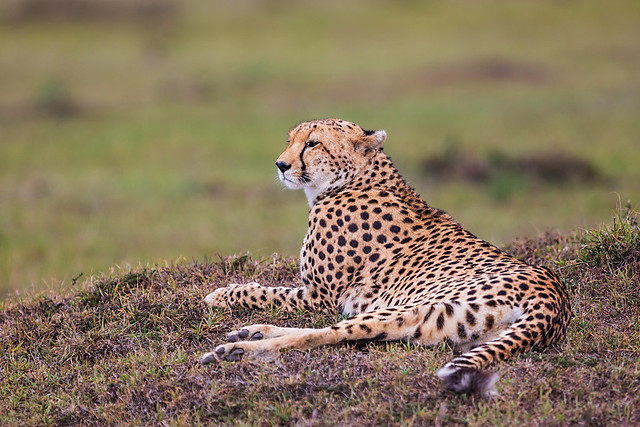 We spent a around an hour with the cheetahs, during which time I had the opportunity to capture a clean image of Amani as she rested on a mound in the afternoon, soaking in the sun’s rays. 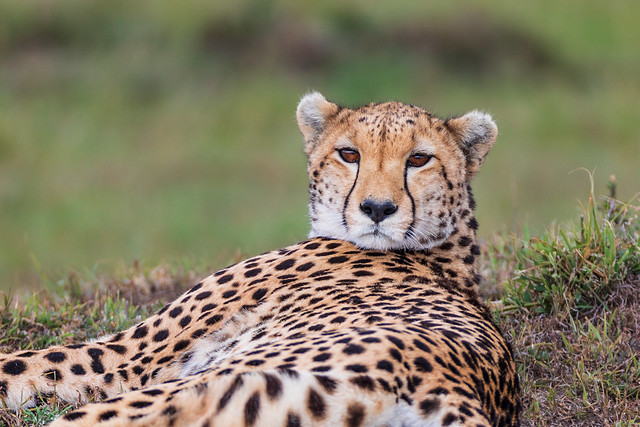 Eventually we decided to move on, heading west-north-west towards the Mara River, and soon encountered a banded mongoose.

After a few quick shots, we continued on, and spotted two male waterbuck and a small group of females in the open, just south of the Mara River.

Having photographed only female waterbuck in South Africa, we briefly stopped, where I was fortunate to see this impressive male standing out in the open, staring straight at me:

While many people visit Africa to see and photograph the big cats, there are many species of antelope to be seen and photographed, and these animals are just as important in the ecosystem as the predators, with their own stories to tell.

I am quite partial to a good antelope image, and as these animals are quite skittish and like the cover of thickets, capturing a pleasing image of such an animal is not always easy.

In this case, I was fortunate that the male waterbuck was out in the open, clear of distracting foliage, and that he was staring straight down the barrel of the lens.

The resulting image is pleasing to me, as it places this waterbuck in his environment, and his impressive stature stands out.

Late in the afternoon, we slowly began making our way in a south-easterly direction back to camp.  Less than ten minutes later, we experienced our first lion sighting of the trip, and again, it was during the first day of this trip.

We encountered some members of a familiar pride: the Cheli Pride.

The Cheli Pride is a dominant pride of lions which inhabits the area near camp in the Mara North Conservancy.

We had seen lions from the Cheli Pride four years earlier, when it was quite a large pride, consisting of 27 members or thereabouts.

Things have changed somewhat, with the pride being apparently smaller, and quite a lot of disruption having taken place.  The pride still exists, but rather than being one large pride as it was four years ago, there appear to be various off-shoots from the main pride.

On this drive, we encountered a female who was resting out in the open during the late afternoon. 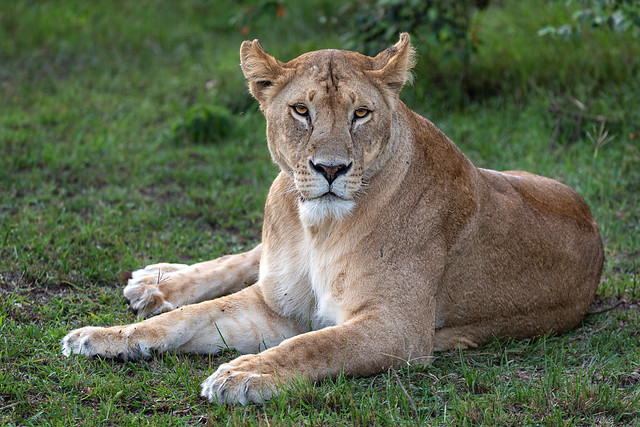 Very close to where she was resting, a large male lion was taking shelter in a thicket.

While I did photograph the male, the busy setting was not great for photography, and even though nightfall had not yet arrived, it did not look like these lions were going to become active, so we moved a little further south-east towards camp, and encountered another female and a very young cub in a thicket.  The cub looked to be around six to eight weeks of age, and was the youngest lion cub we had seen in the wild.

Some 40 minutes later, we were further south toward camp, when we encountered a young hyena sleeping on a mound.  After spending a few minutes there, and determining that the sky was unfortunately not ideal for any landscape photography, we headed back to camp for dinner, drinks and a debrief before bedding down for the night, as an early start the next morning awaited us.

Saturday, 1st June, 2019 had been a fantastic first day in the Mara, with not one but two sightings of the same family of cheetahs, an impressive big-tusker elephant bull, a great photographic opportunity with a male waterbuck, and our first encounter with the Cheli Pride lions, including a tiny cub.

It was fantastic to be back in Mara, a familiar place with new stories to tell.  This trip had taken some time to materialise, but finally we had returned to a place we love to be — one with many more great sightings ahead of us.

Stay tuned for our adventures on day two.