We have arrived in Prague, and spent our first day wandering around.

The day began with a 5am awakening as usual.  We decided to take advantage of the serenity of the dawn hours in a European city and wander out to the Charles Bridge, which is a five-minute walk from the Charles Bridge Palace, where we are staying.

The morning was cloudy and dull, and indeed, it had rained the previous night before we arrived at the airport.

At any rate, it was worth wandering around to see what we could find, and I captured a few images.

Incidentally, the last image I captured from the Charles Bridge was the most compelling of the series.  This is it: 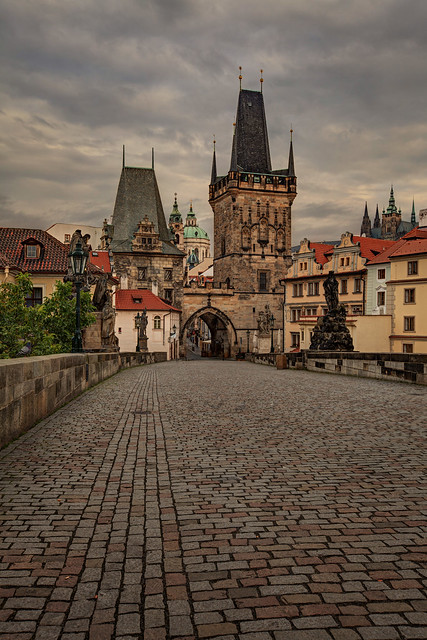 This image was captured at 6:22am.  While the Charles Bridge, and indeed Prague itself, is extremely busy during European high season, this time of the morning was quiet, but there were still numerous photographers and tourists dotted along the bridge — certainly nothing like the chaos going on there right now.

This view looks westward toward the Little Quarter (or Lesser Town), and was taken not far from the end of the bridge.  The main feature past the arch is the gothic Little Quarter Bridge Tower.  On the far right is St Vitus Cathedral, adjacent to Prague Castle, both of which we visited this afternoon.

Despite the drab light, I am quite pleased with this image — it certainly came out better than I expected, and I love the cobblestones on the bridge leading towards the distinctly Eastern European architecture.

So far, from what we have seen of Prague, it is a beautiful city.  To its detriment is the crowds and the tacky tourist stuff everywhere, which starkly clashes with the old-world charm Prague otherwise has.

Just from the many hours of walking around Prague today, there are so many photographic opportunities; but as we are only here for a few days, I will not even scratch the surface of what Prague has to offer, but culturally and photographically.

Tonight, after dinner, I am heading back out to shoot some twilight views of Prague.  Hopefully I will capture something special.