Since my return to seascaping last week, I have been keen to head back out at dawn to shoot more seascapes.

On the one hand, I failed; but on the other hand, I succeeded — at capturing a different kind of image at dawn.

Having checked the weather and cloud situation the night before, I knew the sky would be largely plain, which is terrible for seascapes, but great for twilight cityscapes.

So, in the pre-dawn darkness, I headed to the city and ventured further away from Circular Quay, where I had been the previous day, and where, I decided, I would be keen to capture a cityscape, depicting both the older and newer buildings of Sydney at dawn.

Here is one of the earlier images I captured: 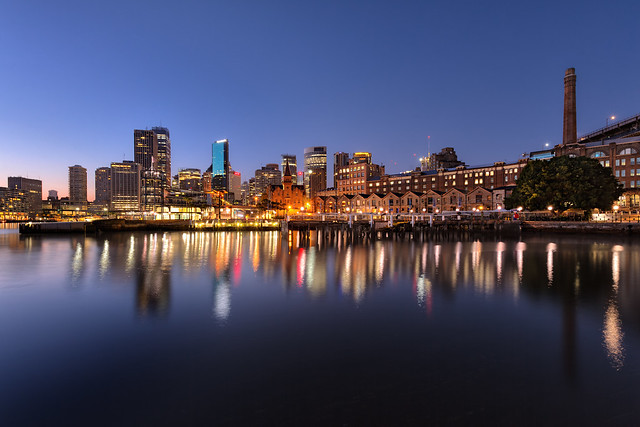 It was great to be at Dawes Point on the harbour early in the morning before anyone else was out and about.

At the time, the sun had not risen, but there was a pink and orange glow in the eastern sky, which was due to rise 35 minutes later.

I also turned the camera around and pointed to the west, where the sky was darker, but where the increasing warmth and softness of the early morning light cast a pleasing glow on the wooden walkway and buildings along Campbell’s Cove. 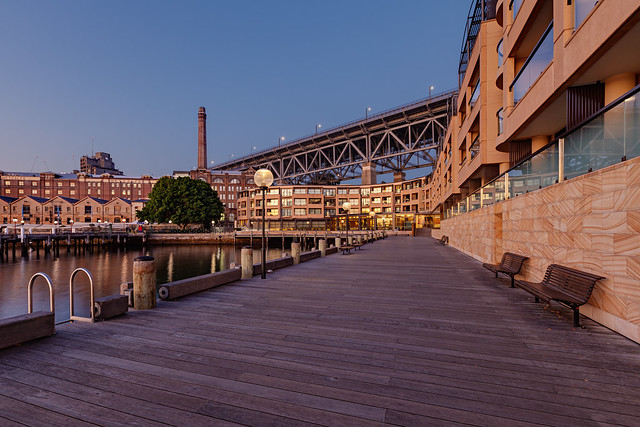 This is a view along the walkway at the northern end of Campbell’s Cove.

On the left is Campbell’s Cove and the old woolsheds in Sydney‘s historic The Rocks, which these days contain restaurants.

In the distance is the southern end of the Sydney Harbour Bridge.

On the right and in the distance central to the frame is the expensive and very nicely positioned Park Hyatt hotel.

One of the challenges presented when photographing a city like Sydney is to capture a less common view.  It is all too easy to shoot the ‘postcard material’, but the city’s famous landmarks have been captured many times, and it is difficult to depict a different or more interesting view of these, or of the city in general.

There are different views of the Sydney skyline, and this particular spot in Campbell’s Cove offers a view of the old and the new, and makes a change from the regular views we often see.

Later in the morning, I was treated to an unexpected and serendipitous sight of two large cruise ships making their way through the harbour.  The leading ship, Diamond Princess, docked at the Overseas Passenger Terminal depicted in my earlier image; while the second ship — a P&O oceanliner — sailed under the Sydney Harbour Bridge and docked at White Bay.

All in all, it was a nice, productive morning.